Liquid Eyeliner Lasts For Hours But Not for Eyeliner Beginners 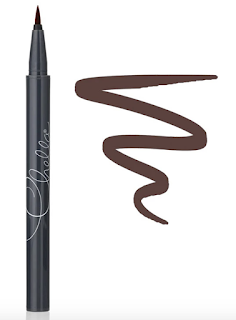 As a blonde with blue eyes, I’m always hesitant about wearing makeup that looks too dark or heavy on my complexion. I’ve tended to stay away from eyeliner in the past, except for special occasions when I want to really do myself up, like a date night or nice event. Also, to be honest, I’m really quite bad at putting on eyeliner and it takes me forever to apply, which also makes me not wear it as often because I never give myself enough time to try it.

I decided to give the CHELLA EYELINER PEN a try before going out to a birthday dinner, to see if my friends would notice that I tried eyeliner again. I gave myself plenty of time (assuming there would be lots of errors), and even then, it wasn’t enough. Let me tell you, as someone who has never used liquid eyeliner before, this was a difficult product to start with. I’m sure that it’s fine tip of precision is exactly what people want, but as an eyeliner amateur, it was difficult to stay in a straight line. I did love the brown color, though, and it dried very quickly and didn’t smudge. However, since I had botched it and was out of time, I had to take it off. It came off with a good makeup remover and a took a little to rub off, which proved that it would have lasted for hours. I’m keen to try this product again after watching a few YouTube videos. Stay tuned for my next liquid eyeliner testing!

I’m going to give it 3 kisses because it’s not for beginners and has little room for error but has a good color and would stay on long!

Posted by The Informed Choice at 8:55 PM